You are here: Home / News / Helmet 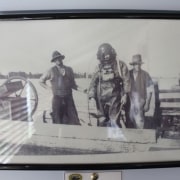 In November 2018 I had the opportunity to visit this museum. The museum is in an old house and entry is via the enclosed verandah. As I entered the verandah I saw a diving helmet and pump.

On inspection the helmet appears to be a Siebe Gorman but with modifications. It had the serial number and the John Bevan, Chairman of the HDS (UK) was kind enough to date it for me as being made in the mid 1920s.

The pump was a bit of a mystery. The front looked like a Siebe Gorman but the lid was tented or A shaped. Unlike Siebe Gorman pumps it had flywheels with curved spokes. These were found on French and Russian pumps.

Again I asked the HDS (UK) and one of the members was able to find a diagram of a Siebe Gorman with the same type of lid but straight spoked handles. I was able to examine the pump closely and could not find any branding. This is most unlike Siebe Gorman who usually put their name in a number of places.

The display was there to represent the local oyster farmer who had used standard dress gear. However the gear was not represented as his but rather as having come from the Torres Strait Islands which was an Australian pearling ground.

The museum is well worth a visit and is listed in our Places of Interest section. 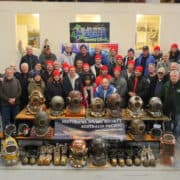 This year will be the 11th annual NAUI Standard Dress Diving course hosted by Professional Diving Services in Portland Victoria. As always there are limited places on the course and a number of bookings have already been made.

Full details are contained in the information and booking form which can be found here: https://www.historicaldivingsociety.com.au/2019-naui-standard-dress-course-application-and-information1/ 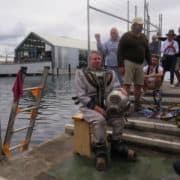 The Australian Wooden Boat Festival is held every second year in Hobart, Tasmania. In 2019, HDS Aus-Pac attended for the first time. Our presence was organised by local Tasmanian member, Simon Lessels.

The display was well attended with hundreds of people watching the diving displays and looking at our static equipment display. We were fortunate to be visited by many current and retired divers with lots of stories to tell. ABC Radio also interviewed us. The interview can be found here: https://www.abc.net.au/radio/hobart/programs/statewideweekends/historic-divers/10797488

Our display also featured in the Hobart Mercury newspaper and the Weekend Australian on the following weekend. Overall a great success for promoting HDS Aus-Pac while also being great fun for those members that attended. 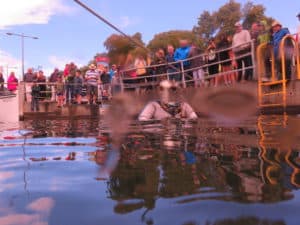 #hdsauspac #standarddressdiving #helmetdiving Want to learn helmet diving? The annual NAUI Standard Dress Course will be held in Portland over the weekend of 9 – 11 June 2018.  This is a long weekend in some states.  The rally for those already qualified will also be run at the same time.  It will be run by our hosts and instructors at Professional Diving Services (PDS).

Last years course was booked out.  This year, due to a decrease in instructors available, the number of students will be halved.  The course is open to both HDS Aus-Pac members and non-members.  Students need to be certified Open Water divers.  Bookings for both the course and rally need to be made with Leslie Zelenc at PDS by 1st May.

Along with the helmet diving at the rally there will be diving in vintage gear, such as twin hose and vintage single hose regulators.  The weekend is also a great social event.  It unofficially kicks off on the Friday evening (note that’s the 8th) with drinks and nibbles at Professional Diving Services premises.  From there the group will head out to a local venue for dinner.

The course and rally officially start on Saturday the 9th.  On the evening of Saturday the 9th we will hold the main dinner at a local restaurant or pub.  On Sunday night there is a BBQ at PDS.  Many people also stay Monday night, giving us an extra night to socialise. 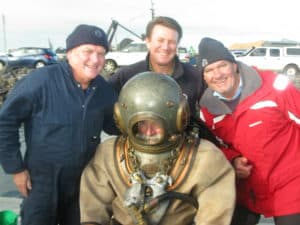 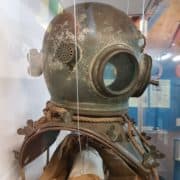 This week (11th April 2018) I was lucky enough to be able to visit this great maritime museum in Huskisson, near Jervis Bay, New South Wales, Australia.

The museum has several distinct sections of maritime related items.  In the room furthest from the entrance thy have a private collection.  This collection would be the envy of any maritime collector.  It includes swords, pistols, paintings, navigation equipment and many other items.  The room before it has a collection of navigation and surveying instruments.

The largest collection is in the room immediately off the entrance.  It includes local history regarding the establishment of the area and local maritime history such as that on the local boat builders.  It is in this room that the standard dress diving equipment is displayed.  This was used on the NSW south coast in the early 1900s.  It consists of a Siebe Gorman single cylinder pump, a Siebe Gorman pearler helmet, hose, dress, boots, knife and fake chest weights. 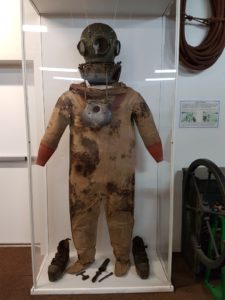 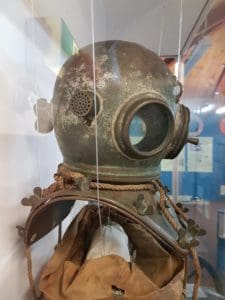 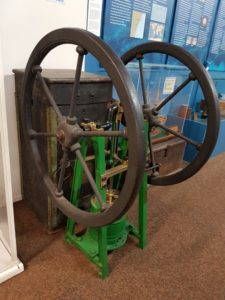 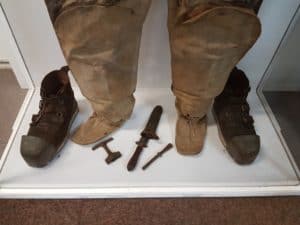 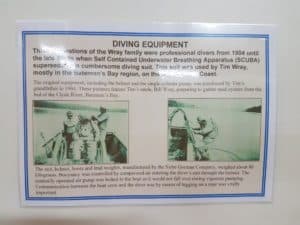 Full contact details can be found on our web site here: Places of Interest 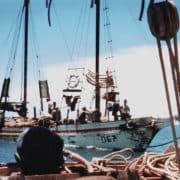 Redbill was built in 1903 at Fremantle as a pearling lugger by Frederick Parkes, Herbert Parkes and Arthur Harding. She began her pearling career in Broome and a couple of years later she became the sole property of the Parkes brothers. 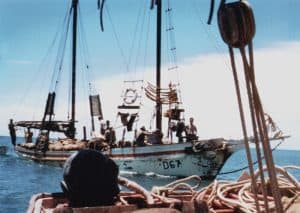 In June 1919 Redbill became a part of, the well-known pearler, Captain Gregory’s fleet. Captain Gregory was well known for his use of Asian and especially Japanese as crew, divers and shipwrights.

Gregory went to Darwin in early 1929 to set up pearling operations there. A first wave of his ships left Broome for Darwin at the same time and 2 were lost in a storm on the journey, including one with all hands. Redbill had stayed back at Broome and was itself rebuilt in late 1929 before setting sail for Darwin late in November 1929.

Redbill was still in Darwin at the start of WWII, when Japan attacked Pearl Harbour and in the harbour for the bombing of Darwin. Gregory offered Redbill and other luggers to the RAN in December 1941 and she was commissioned as HMAS Redbill in June 1942.

Along with another vessel she was used as an advanced warning station by sailing north from Darwin. She had been equipped with wireless and guns. Other tasks included reconnaissance of the northern coastline and retrieving people stranded on Melville Island. Eventually she and the other luggers were deemed not suitable and surplus to use as the Navy acquired new power boats. After that she was left on the mud flaps for about two years until after the war when a Darwin salvage diver, Carl Atkinson bought Redbill from the Navy for £70.

About nine years after the war she was bought by Dick Sonners and returned to pearl diving around the north coast of Australia. Over the next few years she was Top Boat of the Darwin fleet two years in a row. 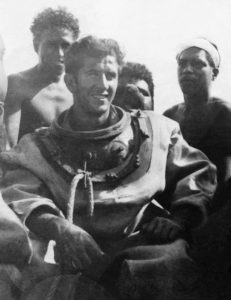 In April 1957 Sonners took her to Samarai in New Guinea to try his luck diving there. The boat had seven crew and Dick as the diver. In addition to diving he went croc hunting and sailed the rivers of New Guinea. 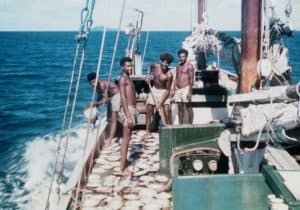 By 1963 Sonners had had enough of diving and moved to North Queensland. Redbill passed to Murray Marx who wanted to use her to ferry supplies along the rivers and to the islands of the eastern tip of New Guinea. Then in August 1965 she was taken over by Keith Briggs who was a missionary and continued to use her for the same purposes.

Gerry Holmes bought her cheaply in 1978 when she was stuck on the slipway at Kawito. After freeing her from the slips and getting her towed down the river to Daru he had her towed to Thursday Island. Holmes spent several years restoring her and using her as a pleasure yacht. Then Holmes moved to Cairns and used her for salvage diving.

In 1988 Holmes sold Rebill to Peter Malcolm and partner Wizz who had been involved in Greenpeace. They sailed her to Tasmania making stops at Brisbane, Sydney and other places. A little over a month after arriving in Tasmania they set off back to Sydney. While in Sydney Redbill featured in a promotion for a TV series called Turtle Run and sailed around Sydney with helmets and piles of pearl shell to be filmed. In Sydney she was chartered to Greenpeace and with Malcolm took part in the Clean Waters Campaign including protests against pollution by Caltex, BHP and others. Later she went on a long trip around the Pacific Islands to raise awareness of pollution in those areas.

Next she was used to make a documentary about young people at risk. The idea was to take them on a long sea voyage away from the bad influences in their lives.

In 1999 Malcolm sold the boat to the Rigney family who intended to use her for tourism in Broome. Malcolm made his last trip sailing her back to Broome.

This information was taken from the book “Redbill – From Pearls to Peace – The Life and Times of a Remarkable Lugger” by Kate Lance. 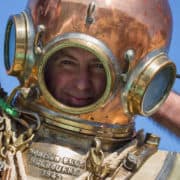 The Historical Diving Society Australia Pacific regularly produces publications, website and social media posts, and promotional materials. The HDS Aus-Pac Calendar has become a much sought after item, and we are always looking for high quality images for Classic Diver front covers. The Committee has decided to encourage members to submit images which reflect activities and interests promoted by HDS Aus-Pac, through a photo competition, details of which are below. END_OF_DOCUMENT_TOKEN_TO_BE_REPLACED 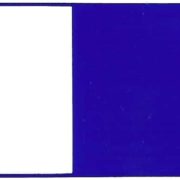 The 1950s and 60s were boom years for spearfishing and scuba diving, which also coincided with a boom in aluminium and fibreglass runabout affordability, so it wasn’t long before the increased danger to divers became very real indeed. END_OF_DOCUMENT_TOKEN_TO_BE_REPLACED 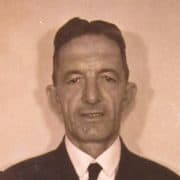 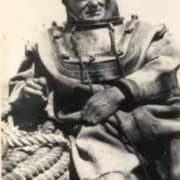 John Johnstone (Johnno) was borne in England and emigrated to Australia as a young man.
He was already well known as a diver in Australia when he was asked to take part in the salvage of the Niagara. This ship had been travelling from England to the US loaded with gold bullion to pay the US for supplies provided in WWII. After stopping in Sydney it moved on to Auckland. A German ship had recently mined the shipping lane out of Auckland and the Niagara hit a mine and sank quickly on leaving the harbour.
For this operation Johnno did not actually dive. The team copied the diving bell used by the Italians to salvage the Artiglio. From the diving bell Johnno, or his brother who had been seconded from the RAN, would direct the grab that was used to first tear away the ship and then to bring up the gold. The team recovered almost all the gold making it the most successful salvage to that time. As there was a war on and the gold belonged to the crown, the team received nothing but their standard pay. END_OF_DOCUMENT_TOKEN_TO_BE_REPLACED