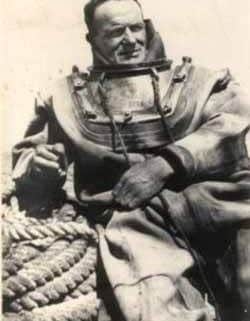 John Johnstone (Johnno) was borne in England and emigrated to Australia as a young man.
He was already well known as a diver in Australia when he was asked to take part in the salvage of the Niagara. This ship had been travelling from England to the US loaded with gold bullion to pay the US for supplies provided in WWII. After stopping in Sydney it moved on to Auckland. A German ship had recently mined the shipping lane out of Auckland and the Niagara hit a mine and sank quickly on leaving the harbour.
For this operation Johnno did not actually dive. The team copied the diving bell used by the Italians to salvage the Artiglio. From the diving bell Johnno, or his brother who had been seconded from the RAN, would direct the grab that was used to first tear away the ship and then to bring up the gold. The team recovered almost all the gold making it the most successful salvage to that time. As there was a war on and the gold belonged to the crown, the team received nothing but their standard pay.

Afterwards, Captain Williams, who had commanded the salvage operation, was asked to set up the Commonwealth Salvage Board. All around the world governments were doing likewise to carry out salvage during war time. Capt Williams asked Johnno to join the team and he did. The Commonwealth Salvage Board ordered some of the only mass produced, Australian made, diving helmets, the Robison. The Robison was made, with permission, as a copy of the Heinke pearler helmet. The Robison helmet is the emblem of the Historical Diving Society Aus-Pac.

One of the first things Johhno did was to travel to New York where the Normandie had caught fire and sunk at the dock. This was a large ship and needed to be cleared from the dock. Due to the need for ships for the war and also for promotional purposes the US government had set up a major operation to salvage the Normandie. This was used as a training ground for salvors and divers. As a result Johnno recommended the US made Mk V as a superior helmet and the Commonwealth Salvage Board switched to the Mk V. On returning Johnno had a falling out with Capt. Williams.

After the war Johnno returned to civilian diving and spent his remaining diving years travelling around the South Pacific salvaging wrecks.

There are a number of books and a documentary on the topic. These include “Johnno, The Deep-Sea Diver” a biography by Peter Dawlish; “Niagara’s Gold” by Jeff Maynard; Niagara’s Gold video documentary and “Deep Water Gold” by Keith Gordon. 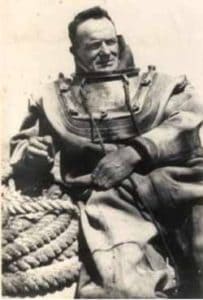 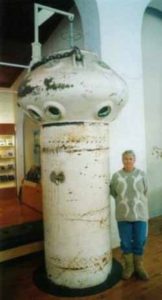