You are here: Home / About / Ted Eldred Award Winners

The Ted Eldred Award was established by the Historical Diving Society Australia-Pacific in 2003 to recognise the role of Ted Eldred in the design and manufacture of the world’s truly first single hose demand valve in 1952, the ‘Porpoise’ Scuba. Nominations for the Ted Eldred Award are called for every year to consider a member who has made a significant contribution in furthering the objectives of the HDS Aus-Pac. Contribution can be research into any aspects of diving history, preservation of equipment or records, promotion and advertising of diving history and contribution to Classic Diver magazine to name a few.

Any member of the Historical Diving Society Australia-Pacific may nominate a person for the Ted Eldred Award.  The nomination will need to state the reasons and be seconded by another member.  A call for nominations is usually included in the Autumn edition of Classic Diver.  All nominations are then considered by the committee and, if awarded, is usually announced at the AGM.  Our list of previous winners is: 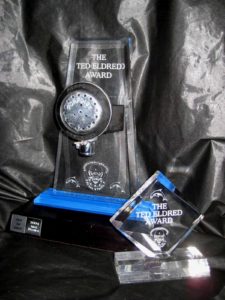 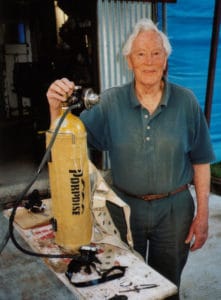