When La Spirotechnique and Aqua-Lung were only producing twin hose scuba and had never dreamed of a single hose system, along came an Australian who changed scuba diving forever. This is the complete story of the engineering brilliance of Australia’s Ted Eldred and the development of his Porpoise scuba, which set today’s world-wide diving standard. Acknowledged by many including HDS US and HDS Australia-Pacific, as the first to mass produce the single hose, 2 stage scuba system as used by scuba divers today.

In this book you will learn about:

Researched and written over three years by HDS Aus-Pac members Des Walters, Des Williams, Mel Brown AM and Tony Gregory; as a salute to Ted Eldred’s pioneering contribution to the world of recreational scuba diving.

The first printing of 100 was sold out quickly. This is a second print of only 50 pieces. No collection of scuba history can be complete without the story of the invention of the single hose, 2 stage scuba.
The book is only available from Mel Brown for $30 plus postage. Postage is dependent on the quantity purchased and the destination. Please contact Mel Brown on melvenbrown@gmail.com for a postage quote and to arrange payment. 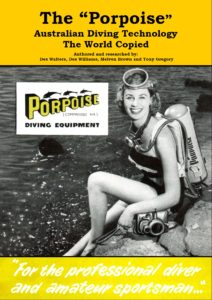 Helmet Diving in Australia – The Earliest Record
Scroll to top