The Diver and the Devil-Fish by Des Williams

You are here: Home / News / Helmet / Hard Hat / The Diver and the Devil-Fish by Des Williams 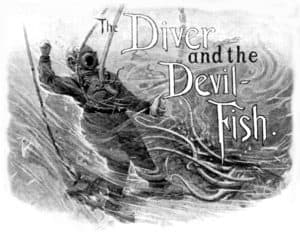 The Victorian era was a time of exaggerated story-telling when it came to adventurers of the deep sea diver, who daily worked underwater, a medium little understood by the general public of that era. Readers of the 19th century were presented with far-fetched, scary stories and adventures which must have been terrifying to read.

But, what I find interesting, is that small boys were generally the target of such ‘ripping yarns” and yes, parents and grandparents gave their small children copies of such popular publications as “Chatterbox”, “Stirring Stories for Boys”, “Boys Own” magazine and the “True Yarns of Diving Heroes” series in “Chums” magazine, and were probably quite unconcerned about the fictional content. Maybe they saw such stories as character building entertainment, despite the yarns being enough to scare the short pants and school cap off small Victorian boys!

The adventures of deep-sea divers became a favourite subject of 19th century fiction writers, who never let the truth get in the way of a good read. Very few people knew much about the sea, it was an unexplored area of the planet, which was only just being opened up by helmet-divers and therefore ripe for a bit of exaggeration. Authors came up with stories of sea monsters, ghost-possessed ships, remote tropical islands and buried treasures. But, the most common subject of terror was the Devil-fish, brilliant night-time reading for small children! Beware the devil-fish!

These days, we know the devil-fish as an octopus or squid, but the “devil-fish” referred to in 19th century yarns was always a colossal, slippery, revolting and aggressive killer, who lurked in dark caves and guarded sunken shipwrecks, lying in wait for the working diver. Not just your normal calamari of today.

Most publications included a pictorial engraving of these hideous monsters and their sneaky attacks, to add to the gripping text. No wonder, even today, the average citizen is still intimidated by the deep sea and what lies in wait out there. There were even stories of the gigantic Kraken, a squid so immense it could grip an entire sailing ship and eat its crew alive. Yikes …… too much for a small boys to understand!

My research has also turned up devil-fish stories, given in interviews to the press of the 19th century, by genuine deep sea divers. What could be more convincing than a story of an encounter with the devil-fish given word for word by a well-known deep sea diver himself? Today, most of these yarns do make unbelievable reading to divers who have had years of experience working in the sea.

Well-known Victorian diver Isaac Smale, was reported in the 19th century press as having two frightening encounters with the devil-fish. His first was in 1879 when he was seized by an octopus at Port Fairy, whilst working on the construction of a wharf. This particular story, which included graphic quotes by Smale of his lucky escape, was syndicated throughout most Australian newspapers and even made it to the British press.

In 1881 Smale was working with a small team of divers, including diver Inkster, blasting away the hazardous Lightning Rocks in ‘The Rip’ at Port Phillip Heads, when he was attacked again! A contemporary illustration certainly shows a formidable opponent, but our divers managed to ward the creature off in time, to get the story to a local news reporter.

But, the next account of an attack on a 19th century diver REALLY takes the prize for the most exaggerated tale. In 1893, diver Wagner from South Australia claimed he was attacked by a crayfish! Today, most sport divers would be delighted by such an experience! We can only assume that the crayfish startled Wagner, who had probably read too many fiction novels himself and was thus a good target for a surprise “attack”.

The Sydney Evening News of 2nd of March 1893, reported the following:

“Adelaide – Wednesday. A diver named Wagner had an exciting adventure with a crafish at Victor Harbour. When below, a crayfish attacked him and in beating it off, he knocked heavily against a huge rock which stunned him. He floated unconscious to the surface and was picked up just in time by a native”.

Believe it or not! 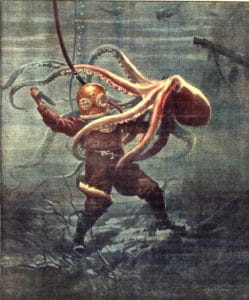