News
You are here: Home / News / Helmet / Development of the Diver’s Safety Flag

The 1950s and 60s were boom years for spearfishing and scuba diving, which also coincided with a boom in aluminium and fibreglass runabout affordability, so it wasn’t long before the increased danger to divers became very real indeed.

By 1960, the spear-fisher’s representative body, the Underwater Spear Fishermen’s Association (USFA), was pressuring all state maritime authorities to recognise the diver’s flag, composed of a red background with one white diagonal stripe from the top right hand corner to the bottom left hand corner and for it to be incorporated in the States flags code. It was thought that the red background of such a flag was universally recognised as a warning of danger. It was the diver’s flag design being supported by American sports divers at the time.

Its design was originally conceived by Denzel Dockery in the early 1950s and was sold through his dive shop at Flint, Michigan, USA. The flag was seen by Ted Nixon, a sales rep for US Divers and he offered to promote and sell the flag nationally. It wasn’t long before the flag gained recognition by various US states and county ordinances who legalised and more importantly, enforced its use.

Under pressure by the USFA for an officially recognised single diver’s flag, the Australian Ports Authority (APA) approached the Ministry of Transport (MOT) in London for advice. Not surprisingly, a complicated British solution was forth-coming! The MOT deemed the US sport diver’s flag as unsatisfactory! They recommended the APA adopt the International Code of Signals flags H over D. Yes, a TWO flag signal to convey the message “I am engaged in submarine survey. Keep Clear.” Internationally, the H flag flown separately means “I have a pilot on board” whilst the D flag separately means “keep clear of me – I am manoeuvring with difficulty”.

It was decided that as the H over D flags system was the accepted and recognised signal to shipping of all nations, it was therefore of greater significance. As the Australian Navy also agreed with this view, the H over D flags signal was adopted during 1962 and was to be flown from a boat during diving operations. And, to be sure, to be sure, it was also recommended that a supplementary red and white flag, (as originally used in the USA!) was to be towed on a float to indicate the presence of a diver in the water. No doubt, Australian flag manufacturers rejoiced!

Not surprisingly, a period of confusion followed, as the individual Australian States, prevaricated over which system to use. The next confusing flag development came in NSW on 2nd June 1967, when the Maritime Services Board of NSW made the following announcement “A new signal flag is to be adopted in NSW to signify the presence of skin divers in underwater operations. This was announced today, by the Maritime Services Board which indicated that at a recent meeting of the permanent committee of the Australian Port Authorities’ Association, it was decided that a red flag with a white diagonal cross should be adopted throughout Australia, to denote the presence of skin divers. The Maritime Services Board will promulgate regulations in due course to give statutory authority for the use of the red flag with the white diagonal cross in NSW.”

This single flag (the NATO Flag 4) was exactly what divers had wanted and in NSW at least, rapidly gained acceptance whilst the US sport diver’s flag was quickly abandoned, for the new closely similar flag. However, no sooner had Flag 4 been introduced, than a combination of international events and the rise in sport diving popularity, dictated a further change.

In 1885, the British Board of Trade had introduced the International Code of Signals to be used by vessels at sea. At this time the code consisted of 18 signal flags. In 1902 the code was revised to consist of 26 flags containing all the letters of the alphabet. The Alpha Flag (Flag A), a white and blue swallow tail burgee, had originally flown to let other vessels know that the boat flying it was restricted in its ability to manoeuvre and should be given right of way. It was traditionally flown when helmet divers were operating from a vessel. Well, brilliant! Finally, a decision to use a flag, which had signalled diver’s below since the 1880s!

During the Fourth Assembly of the Intergovernmental Maritime Consultative Organisation (IMCO) held during 1965, the International Code of Signals was revised with the changes to become effective from January 1st 1969. Of particular concern to divers was the revised meaning given to Flag A. Its meaning now was “I have a diver down – keep well clear at slow speed”.

A recommendation by the Australian Port Officer’s Association on the adoption of the International Code of Signals Flag A, as the flag to be flown by vessels having divers in the water, was accepted by Port and Maritime authorities throughout Australia and came into force on 1st April 1969.

It was subsequently agreed that Flag A must be flown from boats and must measure a minimum of 915mm X 760mm. In 1983, the Maritime Services Board of NSW introduced a regulation approving the flying of Flag A from a buoy, or float, in use by spear-fishers or divers, providing the flag measured no less than 700mm X 200mm. Sanity prevailed and this is still the status quo today.

Your reporter was still cautiously diving under the H over D flags system in Victoria, during early 1970, even though the new single Flag A had been approved eight months earlier. Unfortunately, the new Flag A was not immediately understood by all boat users, so divers were very circumspect in its use during the first few years. Back then, it was not uncommon for fishermen to motor up to a dive boat to ask “what flag is that?” The Scuba Diver’s Federation in various States were quick to set about a national advertising campaign, to promote the new Flag A, amongst all boat users. Bumper stickers were handed out and signs erected at boat ramps during this campaign. Today, the Flag A is widely understood and as always, for your own protection, you are strongly urged to “Fly the Flag for Diver Safety”. 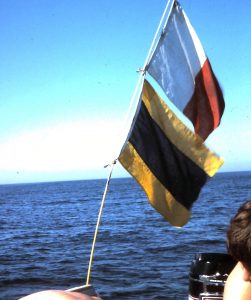 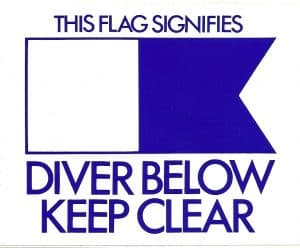