During the 1930s, many young men were inspired by the deep sea exploring exploits hero of the time, William Beebe, who astounded the world with his descents in his bathysphere, to depths never reached by man until that time. Many home-made diving helmets were reported in the Australian press, a trend which actually extended around the world at the time, such was the excitement generated by William Beebe and his colleague Otis Barton.

The most vital safety fitting to include in any diving helmet, is an air non-return valve, which will prevent serious facial squeeze should the air supply line be compromised. I often wonder how many of the home-made helmets were fitted with such a safety feature. Just how many accidents occurred using such primitive equipment is unknown, as only the successful divers seem to have received any publicity.

HDS Aus-Pac member, Peter Taylor, has an interesting family relative, who joined that home-made diving helmet trend. Peter’s great-uncle Merv (aka “Bill”) worked for the Public Works Department and on at least three occasions he made news in the press with his diving escapades.

The idea of constructing a diving helmet came to Bill during bridge construction work on the Murray River, where valuable tools were often accidently dropped into the river and lost. The following press report from March 1934, details Bill’s first helmet constructed from a large confectionery tin!

“Mr Taylor, now engaged on repairing the Cobram Bridge, gave a practical demonstration of a simple diving helmet, which he made himself. It consists of a large “Mintie” (confectionery) tin which envelopes the head, cut to fit neatly on top of his shoulders; two lead weights, each weighing 20lbs, are suspended one in front and the other at the back of the helmet. These keep the helmet tight on his shoulders and also convey him to the bottom. A glass window is affixed in front and two valves from a motor tube are soldered in. To one is affixed a long length of tube, to which is attached a motor tyre pump and the other lets out the excess air and injurious gases.

He casually walked into the river in ordinary clothes with a rope around his waist and explored the riverbed. He was underwater for eight minutes and said he could have stayed for an hour, but the water was too cold for a longer demonstration and he thought the fellows working the motor air pump might get tired.”

During the next decade, Bill Taylor became the resident keeper of the Gellibrand Pile Light, a short distance offshore from Williamstown, in the port of Melbourne. This very large wooden pile light house, was a famous landmark until it burnt down in the 1970s. Bill lived on the lighthouse during the 1940s with his wife and two children, who commuted to school each day by boat. During his time on the light house, Bill constructed a more robust diving helmet and was back to his old tricks in the clear waters of Port Phillip, below the pilings of the light house.

The “Mintie” tin version of his helmet had been replaced by a small oil-drum version, with the same lead weight system back and front and a large rectangular window in front. Only a couple of poor quality images survive and are presented with this report. Bill’s diving attire consisted of a dark pair of dungarees, a dark woollen pull-over and the oil drum helmet. About 20M of air piping, fed by a small motor pump gave him a wide range. During each dive, Bill attached a thin rope around his waist, which allowed his wife to tender for him and read his signals from below. The rope also allowed him to pull himself up, off the bottom.

A reporter from the ‘Port of Melbourne Quarterly’ magazine described Bill’s underwater escapades in 1948 thus: “… in the helmet, he goes down 25 and 30ft (7-9M) below the surface of the Gellibrand Pile Light. He walks along the bottom as you or I would walk along the city streets. Sometimes he stays down for half an hour, or forty minutes.”

Using a small spear, Bill usually managed to get a feed of fish under the lighthouse and was able to return home to enjoy a fresh fish meal in his residence above. 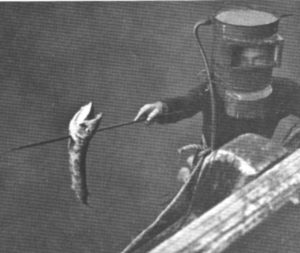 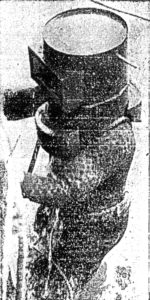 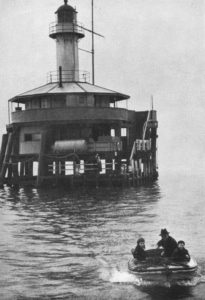