You are here: Home / Articles / Why Divers Wear Red Caps

WHY THE DIVER’S RED HAT?

Do you remember those wonderful TV documentary films produced by world famous underwater explorer Jacques Cousteau and his team aboard the research vessel CALYPSO? At my place they were mandatory TV viewing and my family thoroughly enjoyed exploring those mysterious wild depths with Cousteau and his divers.

The diving team and Cousteau himself were always shown wearing their woolly red diver’s hat, where ever they ventured and whatever the weather. On land, on board the CALYPSO and even in the helicopter, Cousteau always wore his trademark woolly red cap. It has long been a symbol of a deep sea diver …………. so just what is the story behind the diver’s red woolly cap?

During the days of the standard-dress diver, enclosed in canvas suit and copper helmet, the diver was obliged to wear something on his head to keep him warm, because the breathing air that continuously blows into the helmet is very cold. It was even colder than the surrounding water, because by the time it arrived down the long air hose through the water, it had not only attained the low water temperature, but as it enters the helmet it expands slightly, thus chilling it a little more. Further, the air is deliberately blown around the helmet to ensure effective ventilation and to prevent any build-up of expired air, as well as prevent condensation build-up on the viewing ports. This adds a ‘wind-chill’ factor to the cooling effect.

The early divers would have used whatever was the common form of thermal head protection around at the time helmet apparatus was introduced, viz the 1840s. This tended to be a red woolly cap that was commonly used by sailors of the time and especially the oyster fishermen from Whitstable in Kent, England, the ‘home’ of helmet diving. A quotation referring to these hats came about in 1851 when someone described the oyster fishermen tied up at London’s Billingsgate fish market, selling their loads of oysters:

“Who’s for Baker’s?” “Who’s for Archer’s” Who’ll have Alston’s” shout the oyster merchants and the red cap of the man in the hold bobs up and down as he rattles the shells about with a spade”

The caps themselves were of the ‘sleeve’ pattern, in that they were knitted as a sleeve. The two ends were stitched up and then the sleeve was half-pulled inside-out, making it a doubled layered sleeve, now open at one end. The open end was pulled over the head and the lower edge was turned up to provide a four layered band around the forehead. The red diver’s cap tradition was therefore established at the same time as diving helmets were introduced at the oyster fishing port of Whitstable, UK.

It is interesting to also note that the famous British diving equipment manufacturers, C. E Heinke & Co and Siebe Gorman & Co of the 19th century, included the red woolly cap in full sets of their diving apparatus sold. (Ref: “Another Whitstable Trade” by Dr. John Bevan) 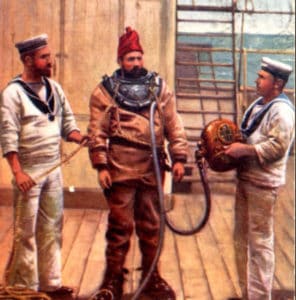 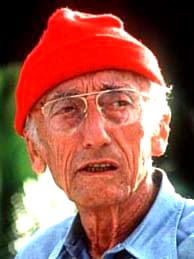