By Des Williams & Melven Brown
Another of Australia’s pioneer SCUBA divers. In this report, and with assistance from HDS Aus-Pac historian Mel Brown, we salute Sydney pioneer sport diver, Dick Charles.
A record of Australian pioneer diving would be incomplete without reference to the amazing contribution made by Sydney diver, Dick Charles. Born in England, he moved to Hobart with his family in 1913, where he later took up an apprenticeship as a fitter and turner with the IXL Company. He then moved to Sydney where he became an aircraft mechanic at Mascot and married Ruth Kelly in 1923.
Dick was a skilful and motivated inventor of his era, who built his own speed boat and in 1927 founded the St. George Motor Boat Club. His boat, for a time, held the Australian speed record at 89mph. He then moved into manufacturing caravans and produced Australia’s first “pop-top” unit and took out a Patent.
During WW2, he produced a special patient stretcher pulley apparatus which was used to carry injured soldiers in New Guinea and further applied for use by the Police Rescue Squad for cliff rescues. In 1937, whilst on holidays, Dick became interested in spear-fishing. It was a brand new sport which quite often led to conflict with anglers of that era. Dick decided that unless spear-fishers united and took control of their new sport, there was a chance that anglers might create enough opposition to have spear-fishing totally banned.
On the 4th April 1948, Dick called a meeting of spear-fishers at Long Reef NSW, with the aim of forming an association to protect their new sport. From this meeting which was attended by hundreds, the Underwater Spear Fishermen’s Association (USFA) was formed. As the association’s first President, Dick Charles guided the association through its formative years between 1948 and 1953. Members of the USFA Committee travelled around the country, promoting and nurturing the sport, which eventually morphed into the USFA of Australia under Dick’s guidance in 1953.
It was about this time, that Dick Charles became increasingly concerned at the number of tragic deaths amongst skindivers. When popular USFA diver Merv Caulfield lost his life at Harbord in September 1953, leaving a young wife and infant son behind, Dick announced at a USFA meeting that he was working on a safety device.
The result of his inventive skill was The Dick Charles Safety Belt, an inflatable floatation belt worn like a cummerbund. Today, all scuba divers wear a buoyancy compensator of BCD, but this device was a much smaller unit, to be inflated by CO2 cartridge only in an emergency. Australian ingenuity was once again at the fore-front of the diving industry. By October 1953, Dick’s device was in full production selling for 75/- ($7.80) which would be approximately $120 today. Designed primarily as an emergency floatation device, it was marketed as suitable for divers and anglers alike. A pull on the trigger would allow the CO2 canister to inflate the belt in an in-water emergency. Within three months of the product launch, it had saved two lives and Dick incorporated the number of lives saved in his newspaper advertising for the product, as that number increased.
Despite the introduction the Dick Charles Safety Belt in the 1950s, the concept of a safety flotation device for divers was curiously, almost totally ignored during the 1960s, even as interest in Australian sport scuba diving grew. During this period, very few divers actually wore a buoyancy vest of any kind and those who did so, seemed to favour the FENZY inflatable vest.
Incredibly, the idea of a buoyancy compensator vest for divers was mooted way back in the 1830s, yes, 175 years ago! In 1838, a London inventor by the name of W.H. Thornthwaite, was awarded a Silver Medal from the Society of Arts for his inflatable belt “to assist divers to bring heavy weights to the surface and save drowning persons”. It came complete with an air pressure cylinder, just like the old FENZY vest of the 1960/70s. Unfortunately, the idea did not take off and a contemporary newspaper report claimed it was …….“Ingenious, but its utility doubtful and not likely to be tested”. Thornthwaite must be turning in his grave, as every recreational diver today wears a BCD!
Pictures:
Dick Charles wearing his safety belt (Image: Mel Brown Collection)
Thornthwaites BCD of 1838
Dick and Ruth Charles at Lord Howe Island in the 1950s (Image: Mel Brown Collection) 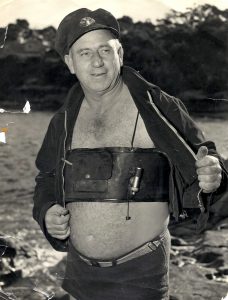 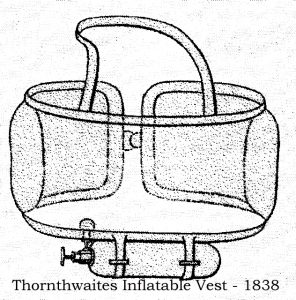 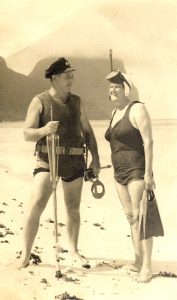