You are here: Home / Articles / Noel Monkman – Diver and Scientist

Adding to our website salute to early Australian and New Zealand scuba pioneers, we focus now on naturalist and marine biologist Noel Monkman. He grew up in Moeraki, New Zealand, by the sea, before moving to Australia, where he met his wife Kitty during concert performances, as they were both concert musicians, Noel playing cello and Kitty the piano.

Throughout their long partnership, the Monkman’s blended natural science and personal adventure with Noel’s great skills as a photographer and diver. They lived mainly in north Queensland and carried out their marine studies in a small laboratory on Green Island, off Cairns, to satisfy their insatiable curiosity for natural history.

Noel Monkman explored the coral reefs with early Aqualung scuba equipment, observing the habits of marine creatures and taking underwater film which became internationally famous. His photography skills also extended to filming through a laboratory microscope, recording some of the miniscule wonders of the deep, normally unseen by the naked eye.

As a lad, living by the sea in New Zealand, swimming with the Maori boys, Noel was set on a pilgrimage from early childhood towards the goal of which the seahorse became his symbol. He collected specimens in a sea-pool and studied them with a water-filled bottle which served as magnifying glass, all of which eventually set him on a career as a naturalist and marine biologist.

Noel’s two books ‘Escape to Adventure’ (1956) and ‘Quest of the Curly-tailed Seahorses’ (1962) can still be found in second-hand book shops and make wonderful reading for divers with a passion for small marine creatures and an interest in the development of marine biology.

Noel Monkman also brings us to a nice segway with my article on the Australian Lawson Lung scuba apparatus, reported in another article on this website. During 1953, famous Australian film actor Chips Rafferty, produced a classic pearl diving drama for the cinema, titled ‘King of the Coral Sea’. A story of pearl diving derring-do, set on Thursday Island in Torres Strait. The hero, Rafferty, a traditional helmet pearl diver, scorns the introduction of the new-fangled scuba system until he becomes trapped under the sea whilst helmet diving for pearl shell. He is eventually rescued by co-star the late Charles ‘Bud’ Tingwell, using an Australian-made Lawson Lung scuba set, after which Rafferty concedes there just might be a future for scuba equipment in the pearling industry. It was a change in pearl diving methodology, which was actually played out in real life in the Australian pearling industry of the 1950s, when divers moved away from the copper helmet system and into to Australian-made PORPOISE scuba and surface-supplied hookah units.

‘King of the Coral Sea’ is a thrilling movie and the underwater action was brilliantly filmed by that talented underwater cameraman Noel Monkman, along with Australian scuba pioneer Wally Gibbins (also featured on our website) who stood in as stuntman for ‘Bud’ Tingwell. Gibbins had been employed as a diving consultant for the movie and took with him to Thursday Island, four sets of the Sydney-made Lawson Lung chest-mounted scuba demand regulators. The film’s underwater action scenes, especially a fight scene between actor Rod Taylor and the villain, still appear as crisp today as they were back when the film was released in 1954. A simultaneous premiere of the film was made at two cinemas on the 17th July 1954, one in the glitz and glamour of Melbourne, the other in more humble surroundings on Thursday Island. Her Majesty the Queen and the Duke of Edinburgh had earlier been treated to a sneak preview of the film during their March 1954 Australian tour. 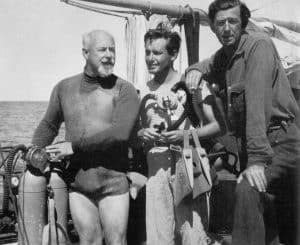 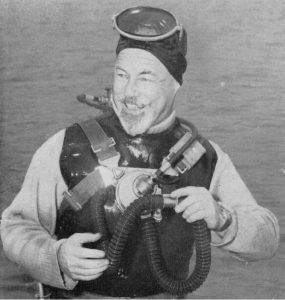 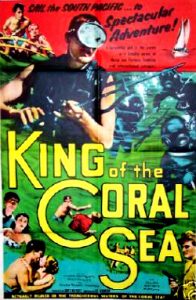 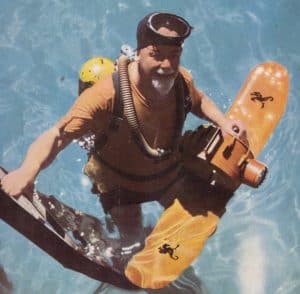