You are here: Home / Articles / Helmet Diving at Thursday Island

The role of Torres Strait Islanders in pearling is currently being celebrated with a 12 month display at the Gab Titui Cultural Centre on Thursday Island (TI).  A highlight of this salute to pearling occurred in September 2006, when history was brought back to life with a historic-diving display at TI.  These activities were commissioned by the Torres Strait

Regional Authority and carried out by Oceania Maritime.Torres Strait connections and innovations:

The romantic vision of a diver drifting along in a Heinke helmet below a lugger while picking up shell, is often considered to be from a lost era and relegated to archival evidence.  However, tangible connections remain today in the form of the memories of still living (though elderly) ex-pearl divers and their vessels.

They are both getting on now but you can still talk to the old divers on TI plus look at old luggers such as the Antonia in Townsville and the Floria in Cairns, where this part of our maritime heritage is appreciated and conserved.

Torres Strait Islanders were first to harvest the pearl oyster from the shallow waters surrounding their islands for food, tools, trade and adornment. The exploitation of pearl shell for commercial interests began in the 1860’s and soon depleted these easy-access shallow beds.  Thus, fishing attention was turned to new, deeper beds, which meant the introduction of standard dress diving to Torres Strait.

In the large, cumbersome suit of the standard dress, the diver is kept completely dry and warm (if wearing the appropriate under-clothing inside the suit). While this is entirely necessary for Europe or the colder waters of Western Australia, it seemed overkill for the warm waters of Torres Strait.  Locals there soon modified it to produce the half suit. Old suits had their sleeves cut off just below the elbow or above the rubber cuff and the legs cut off at the crutch. These modifications allowed the diver to slip into the suit with little effort. Woollen long pants and shirt were worn underneath for some warmth when required and to alleviate chaffing. On their feet divers wore sandshoes both low cut or the ankle high basketball shoe or Dunlop dairy boots with the laces removed for ease of removal to shake out sand and other debris.

Adaptation through minimisation was taken one step further by many in Torres Strait, with the introduction of the ‘helmet only’ rig.  This consisted of helmet and corslet only. Weights were added fore and aft to the corslet to counteract the helmets buoyancy, and anti-chafe shoulder pads were fashioned from old blankets to stop the helmet wearing a hole in your shoulder.  Woollen shirt and pants, plus a pair of sandshoes completed the rig. This very simple outfit was perfect for Torres Strait conditions.  Compared to the cumbersome standard dress, it also allowed for quick diver dress in, and reduction in diver turn-around times.

The cultural connection between pearlshell and Torres Strait Islander life began hundreds of years ago and continues in strength today.  While the golden era of commercial pearling has long gone, it is kept alive in memories and celebrated in many activities, including song and dance.  The current display on TI, ‘the first pearlers’, celebrates this connection from pre-European contact, through the commercial period, and to the present day.  In September last year we had the privilege of bringing a little piece of this history out of the gallery at the cultural centre and back to life in the turquoise waters of TI harbour.

This diving demonstration was the first hard-hat diving to take place in the Strait since the 70’s.  It included a standard dress dive, then a helmet only dive to highlight the Torres Strait modifications.

Though TI is riddled with experienced divers from the crayfishing industry, there are not a lot of experienced standard dress divers under seventy years old.  Thus we put a team together from the Townsville area. The team consisted of Denis Lee Sye, Brendan Furey, my wife Libby and our three kids. Den and Libby are both level 2 commercial divers, Brendan a diving instructor and the kids, well when are they too young to have an adventure like this. The advantage of taking so many people is that you have all that extra baggage allowance to get gear up on the plane with you rather than putting it on the barge from Cairns.

Having previously lived in Torres Strait for seven years, we had the advantage of an extensive network of interested friends through whom we could organise logistics and bludge gear and accommodation. The Hughes family provided the umbilical and Matt Connor of Peddels Ferry Service lent the SCUBA tanks. We set up a basic SSBA kit with the air running through a two-diver panel. Rather than run a noisy compressor while trying to narrate the activity, we hooked-up two SCUBA cylinders to the panel  (one as back up for the other).  Brendan dressed in with SCUBA gear as stand by diver, just in case.

The chosen day dawned with blue skies and clear water, and more importantly, neap tides so that we avoided the typically strong TI currents.  There was a buzz of excitement as we set up the gear and the crowd gathered.  Around 160 people were soon lining the wharf waiting for the action to start.  As we were setting up, Brendan did a great job entertaining the crowd with a resin replica helmet we had borrowed from the cultural centre display.  He took it around the crowd for onlookers to try on, to get some semblance of what it felt like to look at life through a helmet.  Comments ranged from ‘wow this is unreal’ to ‘get the bloody thing off me’.

I started the show with a brief recount of the history of diving, followed by a commentary as we dressed Den in for the full suit dive. We used my Korean helmet and suit with Heinke weights and boots. The standard dress dive went well with the crowd breaking into spontaneous applause as Den came up the ladder, which was very moving. We then had photo opportunities with the diver, and some of the old-timers had their photo taken with him.  Poor Den – this went on for a while and we probably should have taken the weights off him at least.

I did the helmet only dive, which also went well and without incident. During my commentary I encouraged people to come in close and have a look and heft the gear and ask questions.

After the demonstration, the offer was made to dress some of the onlookers into the gear.  Those that accepted included young Torres Strait Islanders whose relatives had participated as divers during the commercial pearling days.  It was an emotional experience, despite not being able to actually dive with the gear.

For us, perhaps the best part of the demonstration was getting to meet some of the old divers and seeing the enthusiasm felt by young people for their history. Thursday Island is a multi cultural melting pot and is well worth immersing oneself in if given the chance. I was well pleased with the turn out but was moved when one of my friends said ‘you would have had an even bigger turn out if the demonstration had not coincided with the burial of one of the old divers on (nearby) Hammond Island’.

We must preserve our diving heritage. 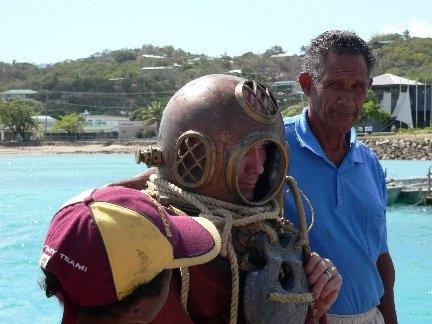