You are here: Home / Articles / For Collectors – Fake Helmets

Most of you serious helmet collectors are probably already aware of the amount of fake helmets out there in the world for sale. But, just in case – set out below is an email from an HDS UK colleague of mine, which I received 30th October 2007. My friend has recently inspected one of these fake Indian made, 12 bolt helmets, in the “flesh”. Some friends of his had just purchased it from a UK dealer and have since been able to exchange it for a genuine helmet, after taking the vendor to task on the fake.

Now, another of these fakes has just appeared on Ebay this week and this (email) to all HDS SEAP members is to serve as another warning to be VERY careful when buying helmets over the Internet. Attached is a photo of the fake helmet inspected by my friend, it is one of a series of photos taken from many angles to show where the manufacturers have differed from the genuine article, but you must admit that the hat looks pretty good at first glance. Hard to tell until one has the hat in hand-  Buyers beware!!! Here is a copy of my colleagues email and photo.

“Hello Des,
Have a look on e-bay at item number 120177081695. It is another example of a fake helmet, like the one I saw here in the UK recently. What’s alarming is the serial number range has now moved on from 192?? to 193?? and they have improved the copy of the air valve from the one I saw.  They are being made in Mumbai in India and if you look at the e-bay item, they are selling other bits as repro, but they say the helmet is genuine – very naughty!! From the photos on the sale page, they haven’t fixed anything else, but some you can’t tell unless it is compared one for one with an original.  What can we do?” 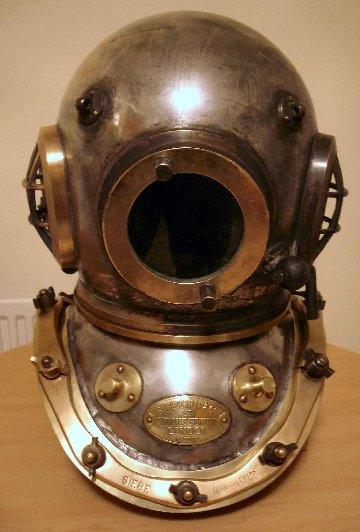