You are here: Home / Articles / Female Russian Divers of WW2 by Des Williams

During the 1930s and especially during the World War Two period, recreational diving was virtually unknown. If a diver went below, it was usually to complete a job of work, such as construction, salvage or human rescue and during WW2, there were some pretty nasty diving jobs, believe me! And YES, female divers, back then, were in the thick of it too.

I should like to bring to your attention a short report on a subject almost completely ignored in our history books – the bravery exhibited by female Russian divers during WW2. The story is set during the early 1940s when Adolf Hitler’s German military juga nought was sweeping through the Russian landscape. The Russian people’s resistance and resolve to repel the German invaders was epic and I encourage readers to do a little research on-line and see just what a dark time this was in world history. The Russian people’s resolve to save their homeland was fanatical and victory came only with monumental sacrifice amounting to tens of millions killed.

Hundreds of Russian divers died whilst clearing river crossings, salvaging wrecks and attempting to disarm underwater mines during WW2, mostly under withering enemy fire. In addition, severe breaches of safe diving procedures accounted for many more lives, such as those divers hauled to the surface by their support crews during enemy air attack. Oh, how they suffered to liberate their homeland!

When Russia came under initial German attack, urgent military-diver training courses were hastily organised for helmet divers as well as instruction in the use of light-weight oxygen rebreather apparatus, which was more suited to clandestine operations. Training was rudimentary and very harsh indeed. Initially, trainees were dropped into the water (in the Russian Winter!) clad only in their summer army uniform, green trousers, slippers on their feet, woollen underwear and with a clamp on their nose to prevent choking. With a weight in each hand, or bricks tied on, the trainees both male and female descended with their rebreather apparatus consisting of a tiny 02 bottle and inadequate C02 absorbent. Many lost consciousness in those early days.

As Russia struggled for survival against a brutal and persistent German attack, their use of light-weight IPA 1 & 2 oxygen rebreather apparatus, meant both men and women could serve as divers. It was the young Russian women who replaced the men, when they were called to the Russian front at the start of the war. These women served as both diving instructors and on-the-spot divers, working underwater using rebreather equipment on all manner of urgent diving work, including installation of vital communication lines and gas and fuel lines under frozen lakes.

Male Russian divers were engaged disarming river mines under constant enemy fire in cold, shallow water, mostly at night, or parachuting into action to destroy bridges. They were equipped with rebreather diving apparatus, along with up to 1100kgs of explosives and extra supplies of C02 absorbent. Their training for special missions was incredibly demanding, including practice exiting and re-entry of submarines via their restricted, greased torpedo tubes, as well as practice exchanging C02 bottles underwater! Russian divers made great sacrifices.

The isolation of Leningrad and Germany’s attempt to conquer that city by removing its access to food, power, water and fuel supplies, was eventually defeated by the unstoppable Russians and their divers who played a key role in that victory. Succour for besieged Leningrad came as divers built pipelines, wharves and infrastructure across and under Lake Ladoga in a Siberian winter to save the citizens and repel the enemy. The story of their success on just this one supply life-line, known as “The Road of Life” is one of the most astonishing stories of WW2. Russian helmet divers worked up to 14 hrs per day in the Siberian Winter and had to be thawed out at the end of each day. Such was their sacrifice to reclaim their homeland from a brutal and cunning German aggressor. (Ref: “Soviet Combat Divers of World War Two” by Pavel Borovikov. ISBN 978-0-7643-5190-7) 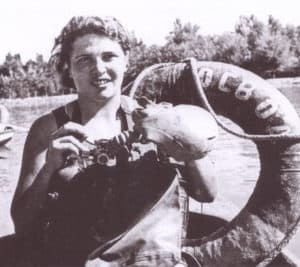 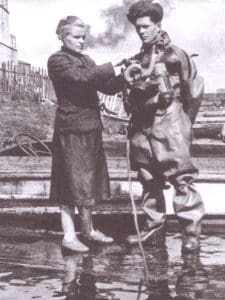 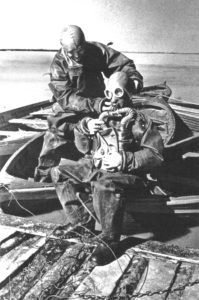