The first readily available air supplied scuba in the Sydney region was the ‘Lawson Lung’, so named due to in being made in John Lawson’s Greenwich Industries factory at Greenwich, North Sydney. Scuba historian Mel Brown explains the development and operation of this early unit. Prior to 1952 a few Sydney based members of the Underwater Spear Fishermen’s Association (USFA) began using wartime Salvus lung-operated self-contained breathing equipment. Initially these had been made available by Pat Williams, a former navy diver who also provided expert technical guidance on their use. Later Salvus units became readily available through wartime equipment disposal stores.

The Salvus units consisted of a steel cylinder containing 16 cu. ft. of oxygen at a pressure of 1800 psi, a hand-adjustable valve cock, an inflatable rubber bag (worn across the back of the neck), a metal can containing soda-lime and corrugated rubber connecting tubes of the type used on wartime gas masks.

Pat Williams successfully designed a unit which eliminated the soda-lime container, replacing the inflatable bag with a flexible rubber bag of ‘concertina’ design which expanded and contracted as the breath was drawn and exhaled. This unit was equipped with a dial indicator showing the rate of consumption from the oxygen cylinder.
Although the dangers of using pure oxygen below 33 ft were well understood and deeper dives up to 120 ft were being carried out with the cylinder charged with a mixture of 60% nitrogen and 40% oxygen, a growing death toll made the development of an air breathing apparatus essential.

Sydney divers were aware of the invention of the Cousteau/Gagnan Aqualung but none of these units were available in Australia. This led to group of Sydney diving enthusiasts, all members of the USFA, to band together in an attempt to build their own. An article in ‘Popular Mechanics’ provided the impetus to build a unit using an aircraft oxygen diluter, although the particular diluter recommended in ‘Popular Mechanics’ was not available. Their first scuba unit was made in a small factory in Day Street, Sydney that constructed juke boxes. This led to this unit being known as the ‘Day Street Juke Box Lung’.

It was first tested at Obelisk Beach, and while it worked up to a point it performed so badly it was scrapped shortly afterwards.

It was becoming apparent that time spent experimenting with the basics was required. Various high pressure regulators were dismantled and design features noted. Sketches of a possible demand regulator were drawn. This process was halted in the summer of 1952/53 when a genuine Cousteau/Gagnan regulator was acquired on loan from Emil Landau, a Hong Kong based French business-man who often spent time in Sydney. It was tried out at Smedley’s Point near Manly, with trial dives being a complete success. The unit was then quickly dismantled and careful note taken of its individual components before being re-assembled and returned to its owner. Within a month the group had produced their first run of twenty units. The machining of parts and the assembly and testing was carried out at John Lawson’s jewellery factory at Greenwich, North Sydney.
Although this unit was based on Cousteau’s Aqualung it was modified in some areas to take advantage of parts readily available from disposal stores, which were beyond the group’s capacity to produce.

The brass cans which comprised the two halves of the demand regulator were spun on steel moulds machined by the group, altogether some 500 cans being spun. Dies, drill jigs and master patterns were used to ensure all parts were interchangeable.
The original large cloth impregnated rubber demand diaphragms underwent several quick updates to finally be moulded of rubber with four teats to which the backing plate was easily fixed.

The first underwater tests were of short duration as a practical method of filling cylinders had yet to be devised. The divers were excited to be able to stay down at the deepest part of Clovelly Pool and breathe comfortably, but while still exerting themselves. Early experiments determined that breathing was easier in a swimming position with the demand valve below the chest, resulting in a unique harness design which carried the regulator across that area.

A high pressure hose was used to bring the air from two inverted tanks carried on the back and attached to the regulator harness. The regulator was attached by rings to the harness allowing an easy method of ditching the unit if an emergency occurred.
Initially ex-aircraft 38 cu. ft. oxygen cylinders were used but when these went off the market it left only the smaller 27 cu.ft. size available.

The problem with obtaining a high pressure air supply for filling cylinders was solved when John Lawson installed a large four-stage Gibb and Miller compressor at his Greenwich factory. This compressor supplied 30 cu.ft. of air per minute at 3500 psi. This compressor had six filters, the first three removing moisture, the last three remaining clean.
Another version of the “Lawson” lung was made by Jack Hogg using the facilities of the Eveleigh Railway workshop. Jack made about 12 units, discontinuing production when warned by Don Linklater he was infringing on Cousteau’s patent.

The Lawson Lung was used in the Australian film ‘King of the Coral Sea’. In this film actor Charles ‘Bud’ Tingwell dons a Lawson Lung before swimming down to rescue Chips Rafferty who was diving traditional helmet gear and had got his air line stuck. Well done Bud! 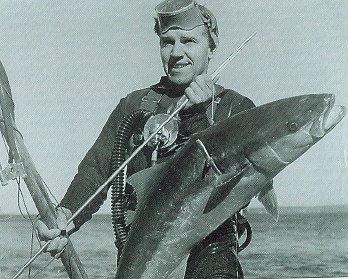